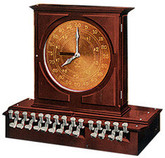 Point of Sale systems have their roots in an 1870s Dayton, OH saloon.  Deeming himself a "Dealer in Pure Whiskies, Fine Wines, and Cigars," owner/operator James Ritty had a successful business. But, like most business owners, he faced a growing issue of dishonest employees who frequently pocketed money from the customers instead of depositing it.

While on a steamboat trip to Europe, Ritty was intrigued by a mechanical device on the ship's propeller that tracked of the number of revolutions for maintenance purposes. Upon his return to Dayton, Ritty and his brother John began working to duplicate this idea to record cash transactions at the saloon with a mechanical device. In 1879, the Ritty brothers patented their invention as "Ritty's Incorruptible Cashier," or, as we know it today, the cash register.

The Ritty brothers opened a small factory in Dayton Ohio to manufacture their cash registers.  Several years later, Cincinnati businessman Jacob H. Eckert bought the business from the Rittys and formed the National Manufacturing Company in 1881. He later sold it to John H. Patterson who continued making improvements to the cash register, including adding rolls of paper used to record each day's transactions.

Over the years, more enhancements were made to the cash registers until the early 1970s, when the first computer-driven cash registers were introduced.

The first computer-driven cash registers were basically a mainframe computer packaged as a store controller that could control certain registers.

In 1980 Fred Ihrer the Innovetor , developed the concept of using networked PC's.

The Terminology POS, didn’t make its way into mainstream business until the late 1980’s.﻿

This concept is what we know today as POS.﻿

In the late 1980s, this software based on PC technology began to make its way into mainstream businesses.

With Total Touch you don't need much support, but if you do, 'we are here if you need us'.

got tired of these companies not listening to your needs,

That is why Total Touch exists today.

We understand your business and care.

The TOTAL TOUCH POS Research & Development teams along with their dealers, possess the product management, business analysts, and engineering resources to ensure the reliability and development of Total Touch to meet todays industry needs.

The TOTAL TOUCH POS Research & Development teams, along with their dealers are intensely customer-focused and collectively offer decades of experience in the hospitality field, providing in-depth, real-world knowledge of the systems and practices unique to the hospitality industry.