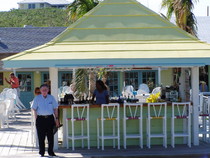 as Told By Ernie Beidleman

THE METADATA OF YESTERDAY,
over 50 Years Ago
FRED IHRERS WORDS
Here are some of Freds words
at a 1964 spring joint computer conference in New York, New York.
Computers did not exist as we know them today."

See the Video Below as to a tribute to Fred Charles Ihrer...

Freds Ihrers interest in computers in 1964:

The Proceedings of the

SEE IF YOU CAN FIND THE COORLINATION....of Today and Yesterday

"The Use of a Computer to Evaluate Computers"

thus the word of Today,

1964 (Spring):﻿ "The complex problem of evaluating and selecting the optimum systems

approach for the optimum computer to solve a particular data processing problem, has plagued management since the time that computers came into use for business and scientific data processing.﻿"

by Fred Ihrer of Comress 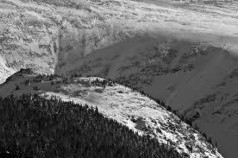 Fred's Ihrers daughter, Sharon, posted the following on Fred's Facebook the day after his passing: 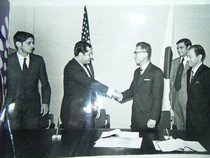 I want to pay tribute to the man who invented and what is used throughout the world today, the concept of using netowrked PC's in hospitality, known today as POS﻿.

A man who gave me a chance to start a new business in Maryland in 1995. I think Fred would actually like this article, even though he was so hard to please, and as we called it, the Ihrer way or, the only way.

I want to pay tribute to the man who guided us through software development and technology, 7 days a week, 24 hours per day from 1990 - 2005 and was never too busy for a customer or a dealer.

Fred's Ihrers daughter, Sharon, posted the following on Fred's Facebook the day after his passing:

In the spring of 1995, I moved my wife Donna and my kids, Matt and Brian to Baltimore. It was a hard move, the kids so young, they so missed their friends and the place they knew as home. We moved from the Lehigh Valley of Pa. due to a bad economy in that area and lack of restaurants for my business.

I came to Maryland and started a new business in P.O.S. along with the help of Fred Ihrer, founder of Comus Restaurant Systems & Comus Restaurant Software. Fred was a Systems Software Engineer for the Pentagon in 1957. Fred started working for RCA Records in 1959 as a software engineer. He then became President of Comress Inc.,Rockville, Md in 1962. – 1972.

I recently found this article showing Freds interest in computers in 1964:

"The Use of a Computer to Evaluate Computers"

by Fred Ihrer of Comress

1964 (Spring):﻿ "The complex problem of evaluating and selecting the optimum systems approach for the optimum computer to solve a particular data processing problem, has plagued management since the time that computers came into use for business and scientific data processing.﻿"

The American Federation of Information Processing Societies (AFIPS) was an umbrella organization of professional societies established on May 10, 1961 and dissolved in 1990. Its mission was to advance knowledge in the field of information science, and to represent its member societies in international forums.﻿

Fred purchased the Comus Inn at Sugar Loaf Mountain in 1972 and started developing Comus Software from the accounting end first. That eventually led to P.O.S. in the bar and dining areas running on 10 key pads on the first 8088 IBM compatible computers, which some of you may remember.

Fred also merged Comress Inc. with NCR Comenten. Fred purchased the Sheraton Potomac Inn in Rockville, Maryland as an owner and operator. Fred built a hotel and conference center that was run by software that he developed.

Fred was interviewed by Walter Cronkite of 60 minutes at that time.

Fred developed the first hand held terminal in the 1980's using a Radio Shack Tandy Computer which would be available to take orders at a dining table. This was featured in the Washington Post.

Barbara Bibbiani, Freds assistant at the Sheraton Potomac remembers the following.  Fred perfected a hand-held device for the dining room order entry that he named JASON.  It was the precursor to order entry by computer as we know it today.  I believe his Sheraton was one of the first hotels anywhere to have 'keyless' room entry using a digitized key card instead.  This was featured in the Washington Post.

This was long before Microsoft Windows and Bill Gates. POS Systems were non-existent at that time, nor invented, it was Cash Register Systems.

Let it be known, that Fred Ihrer invented what is today's Technology

of what we all use daily in restaurants and retail,

Fred invented P.O.S., as the terminology definition is known today, no matter what brand P.O.S. system you have, are being marketed today through out the world today. Fred also purchased a restaurant in Washington D.C. He was determined to learn those business's, and he did.

Fred was not the most diplomatic person, but he was all about the business, 7 days a week, 24 hours per day. I traveled all over the country with Fred promoting Comus, from New York, Chicago, California, Las Vegas and many more locations. It was thoroughly enjoyed and never forgotten. Fred befriended all his competition and business associates across the country, and they all respected him.

Fred found his first dealer for Comus Restaurant Systems, in Virginia Beach, Va. Mike Kelly, now of Total Touch Solutions LLC of Virginia Beach. Bud Heinbaugh, of Retail Management Systems, of Philadelphia was the second dealer. Bud found me, I was the third dealer in the country, then located in Allentown, Pa, and then came hundreds more dealers, from New York to Hawaii.

Fred ran training classes across the country with the help of some great employees, like Richard Mader, of Potomac Md., Steve Woolston of Gathersburg, Md., family members and many more. It is so tough working with family in business.

I recently received an email from Bud Heinbaugh and Mike Kelly, hearing of Fred’s passing they had the following to say:

Hello Ernie,
I appreciate your sending this to me. I concur all the good comments made about Fred. He was a friend and mentor to all of us during the evolution of POS.

Freds tenacity and understanding was incredible.
Thanks for taking the time to honor such a worthy contributor to our shared experiences.

Thanks for sending me this article on Fred. Fred was all of what is stated and what Bud said. He was there for me, all the time. With Freds passing, this is a hard time for me right now. I have lost someone all so close, and now all so far. Fred will be missed by all.

And in Freds final words, he so states the following:

Since Fred didn't want to leave a testimonial, a memorial or an obituary, I felt compelled to write one, which he certainly does deserve.

R.I.P. Fred, you will not be forgotten.

Frederick C. Ihrer, 80, a software developer who designed one of the first “point of sale” systems used in restaurants, died Nov. 10 at Frederick Memorial Hospital.

Mr. Ihrer, an early software developer for the Pentagon, started a software company, Comress, based in Rockville, in 1962. After his company merged with another in 1972, Mr. Ihrer bought the Comus Inn, a historic country inn and restaurant in northern Montgomery County. He sold it in 1989.

In the 1970s, he developed a system of software for use by restaurant workers, now widely known as “point of sale,” or POS. In 1980, Mr. Ihrer founded Comus Restaurant Systems, a business that developed and marketed software for restaurants. He operated the company until his death.

In the 1970s, he also developed the Sheraton-Potomac Inn in Rockville. He later sold the property.

Frederick Charles Ihrer III was born in Burlington, Iowa, and grew up in Denver. He attended Regis University in Denver.

After coming to Washington in 1957, Mr. Ihrer worked at the Pentagon and, later, for RCA before starting his company. He was a Frederick resident.

With Total Touch you don't need much support, but if you do, 'we are here if you need us'.

got tired of these companies not listening to your needs,

That is why Total Touch exists today.

We understand your business and care.

The TOTAL TOUCH POS Research & Development teams along with their dealers, possess the product management, business analysts, and engineering resources to ensure the reliability and development of Total Touch to meet todays industry needs.

The TOTAL TOUCH POS Research & Development teams, along with their dealers are intensely customer-focused and collectively offer decades of experience in the hospitality field, providing in-depth, real-world knowledge of the systems and practices unique to the hospitality industry.